how i found the Life i’d always wanted 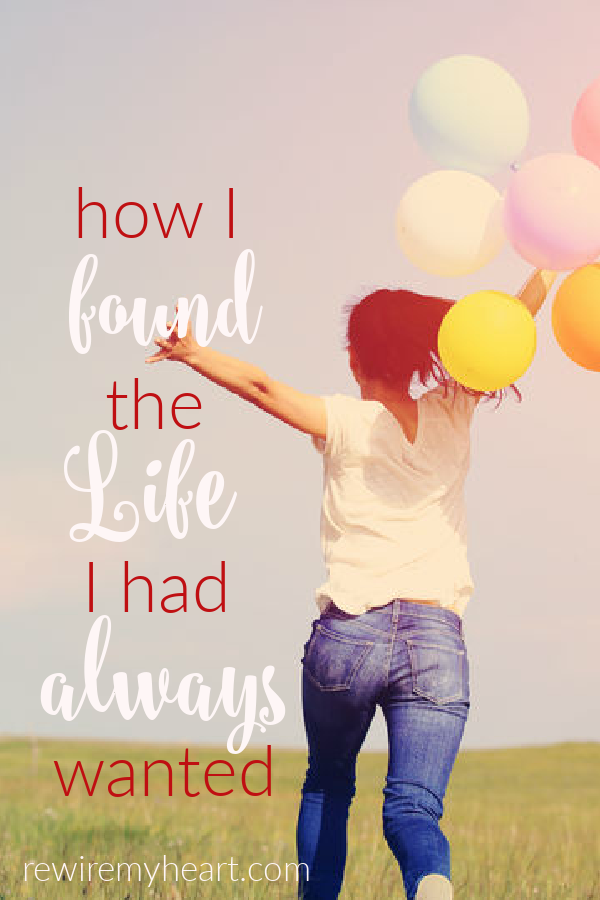 i’ll never forget the day i began to find the Life i always wanted.

For most of my adult life, i had bursts of spiritual renewal and energy, but i couldn’t seem to sustain them.

Years of health and family struggles had taken their toll.

Ultimately i felt like the life had slowly drained out of me.

i looked perfectly healthy, but my body was often racked with pain from a host of autoimmune disorders.  And my soul and spirit had suffered blows that i increasingly did not have the power to bounce back from.

You see, virtually nothing in my life had turned out like i had once imagined. Nothing like i thought it would be.

Too many disappointments over the years had led me to curb my expectations, for my own protection. i had just failed or been let down too many times.

i began to quit looking for a result and began to cling to my Redeemer.

And i believe He smiled and said, Finally, Child. Now I have something to work with.

Jesus began to open my eyes to my Father’s sweetness and goodness to me even in the midst of my pain. Mercifully, the first cracks began to form in the legalistic, demanding view of God that i’d grown up with.

i was starting to believe that He wasn’t punishing me. He was truly compassionate. i didn’t understand why HE allowed me to suffer, but i was beginning to believe HE was good.

I began to let go of what i thought my life should look like in ministry, in family, parenting, marriage, health. i let go of trying to meet others’ expectations. Trying to figure it all out and make things happen my way overwhelmed me. Jesus began to show me how to choose to trust and follow HIM step by step. It felt good. But i still clung tightly to my incredibly unhealthy relationship with GOD.

the start of new life

Looking back, the first sparks of new life started a couple months earlier. In April 2017, God began to do something new again. Another stretch of physical brokenness had brought me to my knees.

This time, God wanted to meet me there and smash what remained of the barrier of fear and legalism that stood between us.

i believed JESUS loved me. He had always seemed approachable. But although i had seen glimpses of my FATHER’S love, i struggled to believe that HE could ever truly be pleased with me.

My belief in GOD’s goodness was only head knowledge. It hadn’t make its way to my heart.

It was time to slowly bring me to Life.

Last spring, GOD began to reveal HIMSELF to me in a way i had never experienced HIM before. i said, “Oh, my goodness, if this is who You really are, i want more of this. i want more of YOU.”

Slowly, HE began to lead me away from media, politics, Facebook and so many other things that were clogging my heart and mind.

Even though my circumstances hadn’t changed, I felt a level of joy, peace and freedom that i had never experienced before.

I told my husband one day in May, “i am having fun in my relationship with GOD for the first time. Ever.“

i didn’t think that was allowed.

Shortly after that, GOD revealed to me, You’re having so much joy because you are finally serving the REAL GOD. You have been serving the false GOD of performance. The closer you get to the real Me, the more you are experiencing joy, grace, love, peace, freedom. i don’t just give you those things. i AM those things.

from death to life

A few days later, HE led me to a journal that my Great-Aunt had written about her sister —my grandmother — who died at the age of 26.

i was always told her death was from complications of multiple abortions, but never anything more specific. As i read this journal —one i had found years ago and stuck in a box unread — i discovered that my grandmother died after surgery to correct a “bladder problem that had bothered her since childbirth.”

After surgery, an embolism went to her heart and killed her.

It was like the words jumped off the page in neon.

That was exactly how my physical wilderness started. My first physical symptoms of sickness started in the hospital shortly after the birth of my first child.

In fact, the trauma of childbirth flipped a genetic switch in my body (i found out years later) that caused a host of autoimmune disorders, starting with a tormenting and painful bladder condition called interstitial cystitis.

As i read that journal, immediately GOD said to me, satan has been attacking life in your family for generations. What he used to destroy your grandmother, i am using to draw you to ME and heal you. You know the REAL ME now. You pray in the power of the REAL GOD to break this generational bondage.

i prayed out loud right then and there that GOD would break the bondage that had held my family hostage for so long.

HE opened my eyes to the long history of satan’s attack on life in the women in my family — infertility, abortions,  endometriosis, near miscarriages, ovarian cancer, early hysterectomies. HE was breaking it.

i woke up the next morning and the first thing in my head, before i was fully awake was the thought, You are a new creation.

On my way to church that morning, i thought about how i had been feeling better the last couple of months. My migraines had slowly gone away. My need for thyroid medication was slowly decreasing. But for the first time, i got it. He was healing me physically, as well as spiritually. I AM A NEW CREATION!

I pulled into the church parking lot and wanted to tell someone as soon as possible. Someone who would truly “get” the significance of this amazing realization i had just made.

This feeling of exuberance was a stark contrast to four years ago, when i went to church physically and spiritually broken. At that time, few people knew i struggled so much physically.

One morning back then, i ran into Sandy, a sweet woman i hadn’t seen in months. She was wearing a halo brace after a difficult spinal surgery.

God sent this “angel” with a halo to ask me how i was doing. i broke down and for the first time, shared my struggle. Amazingly, she said she had the same rare autoimmune condition (that most people have never heard of) and GOD healed her. She said with absolute conviction: “i believe HE is going to heal you too.”

On the morning of June 4th, who was the first person i ran into that day i realized i was being healed?

The first person who spoke healing over me was the first person GOD put in my path to share that i was being healed. She hugged me and said, “You look young and beautiful and new.” Yep. Full of new life.

the Life that was always there

i walked in to the church service. It was communion Sunday.

i hadn’t taken communion in three years. My diet has become so restrictive over the years that i was afraid to eat anything that might trigger pain symptoms.

That morning, with tears running down my face, i heard the Holy Spirit say, This won’t hurt you. This is what healed you.

He had already given me my healing by access to HIM through the death of HIS Son. i had looked for it in performance, my ministry, my family, my doctors, supplements. These are all good things, but they were not meant to be my saviors.

It wasn’t that HE didn’t allow those things to heal me. It’s because they couldn’t. He loved me enough to wait until i was ready to see the REAL HIM and then as Hosea 2 says, “He spoke to me sweetly in my wilderness,” gave me eyes to see and won my heart.

As i began to seek HIM more and more, He began to lead me out of my spiritual and physical wilderness, not because HE was withholding it before. HIS deliverance was there all along. i just didn’t see it. As i sought HIS direction and leading, HE led me to the REAL HIM and the people who could help unlock the mystery of my physical healing.

The healing process continues. He continues to detox me physically and spiritually. Peel layers of toxicity in my mind, body and heart. My joy and love for GOD continues to increase exponentially. i am completely off all medication and supplements for the first time in 20 years.

It’s painful when toxins – both spiritual and physical – leave our bodies, minds and hearts. Any pain now, however, HE has assured me is an indication of my healing, not my sickness. They are LIFE pangs, not death pangs.

GOD doesn’t just give life. He IS Life. It took time for me to truly find Him.

The Life i’d always wanted had been there all along. And He was nothing like i thought He would be and better than anything i had imagined.