new life begins when we “let it go”

It was a familiar ritual.

I’d done it for so long, it was difficult to remember what life was like before it.

Each morning, often before I had even brushed my teeth, I went to my kitchen cabinet and took my first of three daily doses (handfuls) of health supplements. Trying desperately to beat back the pain and illness that plagued my body.

Actually, if I’m honest, I had a nagging sense of anxiety until I did this. I felt like any chance of improving my quality of life was dependent upon these supplements. I would experience great fear if I  inadvertently missed a dose or ran out of a supplement and couldn’t replace it right away.

They had become my life preserver. The thing I clung tightly to for hope and security.

I’d been on many “protocols.” But even when the protocol changed, I usually kept the supplements that I no longer took “just in case” iImight need them again in the future.

However, over the last few months, i had experienced incredible encounters with the real Life Preserver.

The Real and Living God.

He had dramatically freed me from my old view of Him as a harsh and difficult Taskmaster. He was empowering me to see Him with new eyes, to experience His love on a new level that I didn’t even know existed.

As i did, I received spiritual healing that I didn’t even know i needed.

On June 4, 2017, just four days before this, i realized i was getting the physical healing i believed God had promised me three years earlier.

I’m not saying this is always the case, but I recognized that for me, my spiritual and physical sickness were intertwined.

As God began to peel back layers of spiritual toxicity in my mind and heart, the toxicity in my body began to be peeled away as well. I was now drawing on the healing power of the Real God, not the harsh god of performance and legalism that I had blindly served for so long.

Even though I was now confident my healing was underway, I continued my daily ritual of taking my supplements.

But something different happened on the evening of June 8th.

I opened my kitchen cabinets and immediately the thought popped in my head, You don’t need those anymore.

It took me by surprise (as God is prone to do). What? I don’t need those anymore?

But I knew in my heart that I did not.

And so without another thought or even a trace of anxiety, i grabbed the kitchen trash can and began, one by one, to throw away my old “life.” 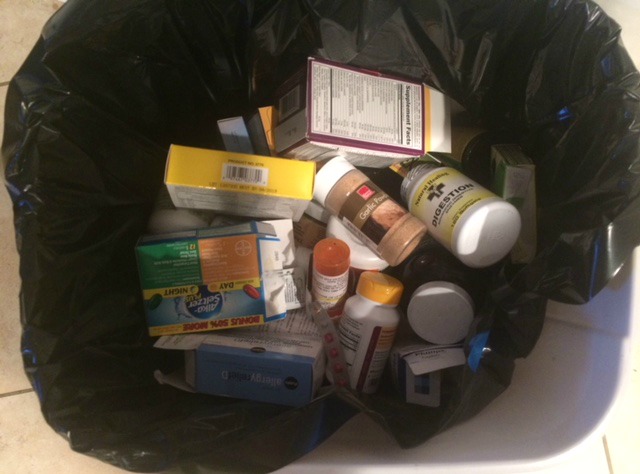 This was not a blind, impulsive, foolish act of faith. In fact, for the first time my eyes were wide open.

I was only able to do this because God had opened my eyes to the fact that He was leading my health journey now.

The contents of these cabinets represented my old “melinda-led” journey. I was on a new path now. I had to let go of my old “life preservers.” I had embraced a new One. One who created my body and knew intimately exactly what I needed.

My new Physician was Someone who understood my complicated body and the complex physical problems that had stumped most of the medical community I had encountered.

Over these last few months, His overwhelming expressions of love for me had convinced me that my life was safe in His healing hands.

As I picked up and discarded each supplement, I felt a giddy sense of relief and freedom.

But i knew immediately that i was to keep one supplement to represent each painful condition i had battled. These would be “altars of remembrance” so i would never forget all that He was delivering me from.

There were also four additional ones that I felt uncertain about throwing away so I set them aside until the end.

i asked God to show me whether i should keep these or not. After some Google research, I noticed a common thread in three out of the four I had kept: they had incredible LIFE-giving properties.

Although they had applications for a number of conditions, these were often used for vitality and energy and/or used to facilitate pregnancy or nourish the growing baby.

God had been showing me over and over again these last few weeks that He was giving me NEW LIFE, so I knew I was to keep those three. 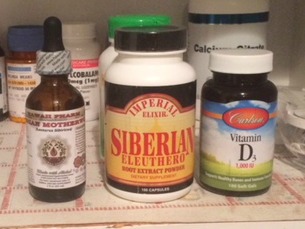 However, I couldn’t seem to get any clarity as I prayed and researched the fourth supplement — Ox Bile. Then I felt God say, “Don’t look up Ox Bile. Look up oxen.” When i did, I found the description of “oxen” as animals that are often yoked with heavy loads.

That had been me. Yoked by heavy loads of worry, fear, sickness and performance. He was freeing me from all that. Ox Bile went into the garbage can with the rest of my old life.

a process of “letting go”

This was certainly not the first time God has clearly told me to “let it Go.” He had been preparing me for this moment for some time.

Several years prior, i had hit a wall. Trying to fix and figure out and control everything had left me confused and bordering on despair.

It was then that God cut through all the confusion and allowed me to see and experience the bright light of His love and grace.

Gently and patiently, He had told me to “let it go” when I had become burned out by trying to pursue God-given writing and ministry dreams my way.

He assured me it was safe to “let go” of trying to fix or control one of my precious children who was making some heartbreaking choices.

He had been leading me gradually to let go of my chronically ill son into His hands.

In all these situations, I had to die to my way of doing things. When i finally did, new life began to sprout in my health, ministry and relationships.

God was, in effect, saying, “Melinda, you don’t know the future. You don’t know your kids the way that I do. You don’t know my plan for you and the gifts I’ve given you. Follow ME. One step at a time, I’ll show you the way. “

Jesus said the same thing to His disciples. Each one had the same reaction.

“Come, follow Me, and I will make you fishers of men. Immediately Peter and Andrew left their fishnets and followed Jesus. Going on from there, Jesus saw two more brothers, James the son of Zebedee and his brother John … Jesus summoned them, just as He had called to Peter and Andrew, and immediately they left their boat and their father to follow Jesus.” Matthew 4:18-22

“Later Jesus was walking along and He saw a man named Matthew sitting in the tax collector’s office. Jesus (to Matthew): Follow Me. Matthew got up and followed Him.” Matthew 9:9

They immediately “let go” of their old life and old ways of doing things and followed Jesus. Coming face-to-face with the Real and Living God just seems to have that effect.

Following is simple, but not always easy.

Sometimes this “one-step-at-a-time” journey has seemed like a death march.

Dying to self is painful.

Allowing Him to kill my ego and purge comfortable “saviors” has been and is an excruciating process at times. But I find such comfort in this assurance:

“The person who wants to save his life must lose it, and she who loses her life for Me will find it.” Matthew 16:25

Losing my life has saved me. All I had to do was let it go.