the day God gave me new eyes to see 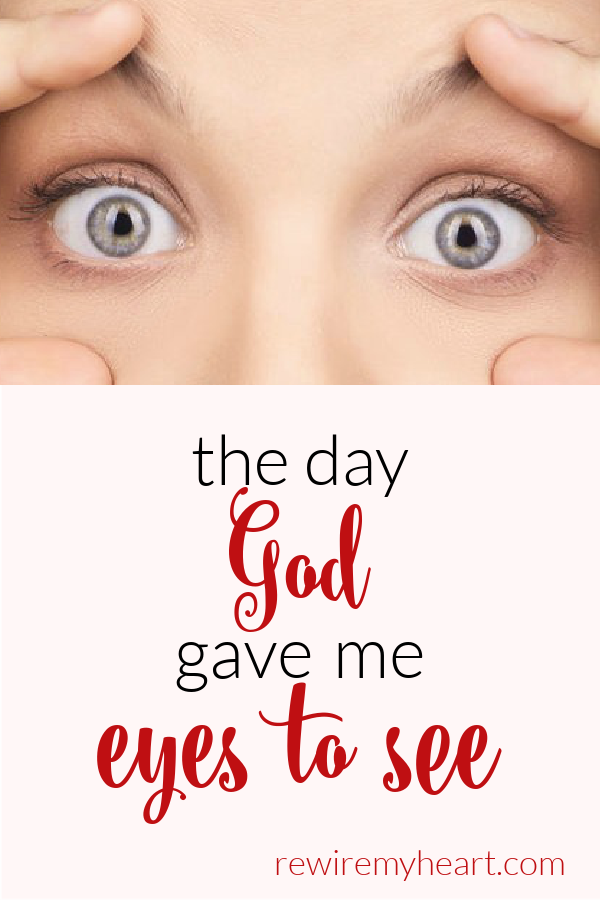 i can’t remember a day when i had clear vision.

i began wearing glasses at a very young age and my vision quickly and progressively got worse. i’m not blind, but my vision is terr-i-ble.

i was navigating through those lovely adolescent years in the 80’s — before glasses were trendy and cute. Instead, i was sporting the ever-fashionable large-framed pop bottle glasses. They literally covered half my face.

i didn’t just wear spectacles. i was a spectacle.

Trust me, the boys came running. Yeah, no.

i owe a huge debt of gratitude to the inventor of contact lenses. My parents finally let me get them when i was 16.

i might never have been asked out on a date without them.

As i got (ahem) older, my reading vision also took a hit.

In the early morning, when i would read my Bible and devotions, i put on my glasses (now, mercifully, with thin lenses) and my reading glasses over them in order to see the words clearly.

On the morning of June 8, 2017, i finished my time with God, took off my two pairs of glasses and started to put in my contacts.

As i went through this familiar routine, i felt God say to me, “What I’m doing internally in you, I’m going to manifest externally.”

Now i don’t generally use the word “manifest” that often in everyday conversation, so i was pretty sure it was Him.

If you’ve been following my story, you know that what God had been doing internally in my heart and mind has been nothing short of life-changing.

He has completely changed my view of Him from Demanding Taskmaster to Gentle Teacher from Disapproving Father to Loving Daddy. He was showing me how He was there all along in the midst of years of suffering.

Last June, for the first time, i was learning how to love Him more than fear Him. And seeing and knowing the REAL God —not the oppressive false god of performance i had served for so long — was setting me free from physical and spiritual bondage in miraculous ways.

So those words He said to me — what i’m doing internally in you, i’m going to manifest externally — struck me like a thunderbolt.

What could that mean? i wondered.

So i asked Him, What do You mean by that, God?”

This is what i heard in my spirit, “I’ve given you new eyes to see Me. You’ll wake up one morning and your vision will be healed. Two-step process: First, your reading vision and then your contacts. I am a God of process and progression.”

i believed that immediately — all of it.

i knew He was a God of process, but He did not often seem to be a God of speed (at least not in my life. i think Abraham and Sarah would agree.) So i didn’t assume this was going to happen right away. i just wrote about it in my journal and tucked it away in my heart.

The next morning, like always, i went to my spot to read my Bible. i also often read the devotional Jesus Calling.

Such good stuff in there, but sheesh, the words are tiny and printed in a very light tan color.

Both sets of glasses definitely needed.

For some reason, on that morning, i put on just my regular glasses and began to read the Bible on my laptop.

After a few moments, i realized i didn’t have my reading glasses on and thought, “That screen looks awfully clear.”

Then it struck me. Could it be? i thought.

Jesus Calling would be the test.

So i grabbed it, opened it up and was able to see those tiny, faint words with perfect clarity.

When i finally calmed down after making this miraculous realization, God led me to John 9 and the story of the blind man Jesus healed from his physical and spiritual blindness.

i realized, with jaw-dropping awe, that He was doing the same for me.

In John 9, Jesus made the first move and approached this man who had blind from birth. It doesn’t even say that the blind man asked to be healed!

i can relate. My entire life, i had been blind to who God truly was. Step by step, He was peeling off layers of lies and brokenness that was obscuring my view of His true loving nature and goodness.

At just the right time, when i was ready to see Him, God approached me and opened my eyes. Not because i was worthy of it (or even knew to ask for it!) but simply because He loved me.

In that same way, God was now gradually healing my physical blindness.

Why? Actually, i don’t fully know why. i have learned to quit trying to figure God out. i can’t explain it. i can only tell you what He did for me.

His ways are not our ways. All any of us can do is to be open to how God wants to reveal Himself to us.

The blind man didn’t know why either. He didn’t even know Jesus was the Messiah, but he must have sensed  something in his spirit. Enough to allow Jesus to spit on the ground, make some mud and smear it on his eyes, and then obey him when he told him to go wash in the pool of Siloam.

Here’s a couple of truths that i’ve learned that i think the blind man in John 9 must have learned too:

God is both spiritual and practical.

When Jesus walked the earth, He didn’t just go around piously preaching principles, disconnected from the reality of people’s practical needs. No. Over and over again, He met people at in practical ways. The manner in which He did it opened their eyes to the fact that He was truly what they needed. Their encounter with His gentle love and compassion compelled them to want to serve Him.

He healed this man’s physical blindness … what could be better, right? But Jesus knew that his physical healing alone wasn’t really his deepest need. So later, after the Pharisees questioned, mocked and belittled this man and what had just happened to him, John 9:35 says, “Jesus sought out the man.”

And He asked Him a question: “Do you believe in the Son of Man?”

The man replied, “i want to believe, Lord. Who is He?”

And Jesus replied, “You have seen His face with your new eyes, and you are talking to Him now.”

He had received His physical sight. Now this man’s spiritual eyes had been opened. Immediately he said, “Lord, I do believe.” (v.36)

When we see who God really is, we fall to our knees. i’ve been barely able to stand for a year.

God leaves us with reminders of His goodness.

We are such forgetful people. We always have been. For example … God saves the Israelites by splitting the the Red Sea and about three verses later they’re whining that God is going to let them die in the desert.

Yep. God does something miraculous one moment and we’re doubting Him the next.

But this man couldn’t forget this Man who changed and saved His life. Every time he opened His healed eyes, He was reminded of God’s goodness and saving grace.

Jesus told this man to wash in the pool of Siloam. Look at what John 9:7 says: “Siloam means ‘sent,’ and its name reminded us that his healing was sent by God.”

i see the Light

i have not worn my reading glasses since June 9th, 2017. Like this man, it is difficult for me to read anything without remembering that my healing — both spiritual and physical — was sent by God.

i’m still waiting for step two of my vision healing process. My physical healing is progressing but not complete.

It will happen. God said so. But i’m not impatient.

Because i’ve seen Him for who He really is. He has already met my deepest need.

One more thing … Yesterday, i stumbled on this adorable video.

i “lost” a pair of physical glasses, but i gained a pair of spiritual ones. Seeing God brings joy.

Baby, i know how you feel …