the problem with God becoming human 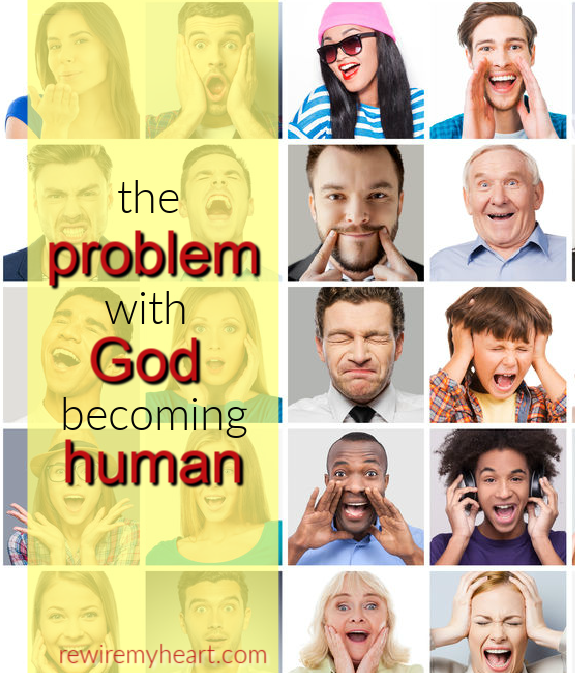 They thought He was just another man.

And a clueless one at that.

They were walking to Emmaus. Two men in deep despair.

Jesus had just been crucified. All their hopes were dashed. They thought He was going to be their earthly King and save them from Roman oppression.

But now He was dead. And they believed their dreams of liberation had died with Him.

They were discussing their intense grief and disappointment as they walked along the dusty road.

Then suddenly, Someone joined them.

As Jesus was often so prone to do, He simply asked them a question: “What are you discussing so intently as you walk along?” (Luke 24:17)

They literally stopped in their tracks and stared at Him in disbelief.

Really? Who is this guy? Everybody was talking about what had just happened to Jesus! This guy must have crawled out from under a rock somewhere.

“One of them, named Cleopas, asked Him, ‘Are you the only one visiting Jerusalem who does not know the things that have happened there in these days?’” (v.18 NIV)

They begin to tell Him everything that had occurred.

And He began to explain Scripture and prophecy to them in a way they had never heard before.

Hmmm… maybe this guy wasn’t so clueless after all.

As they walked along, they still weren’t quite sure what to make of Jesus.

But their perception of Him was changing. He was certainly different than who they imagined when He first joined the conversation.

They ask Him to join them for dinner.

It isn’t until He breaks the bread at the dinner table that they have their “Eureka” moment …. Jesus! It was Jesus that was walking with them all that time!

They saw Jesus as fully human. And He was. But they missed that He was also fully God.

They missed who He really was.

[Tweet “Making God human in our heads causes us to instinctively put up walls in our heart.”]

as clueless as cleopas

For most of my life, i’ve been as clueless as Cleopas and his pal walking to Emmaus.

A childhood view of God poisoned by legalism —coupled with disappointments and experiences with people —colored how i viewed God. i often expected Him to act and react just like people did. Like a human.

It’s a frightening thing to attribute certain human characteristics to an all-powerful God: God can do anything He wants …. and He’s probably really mad at me. Lightning bolt time! Shiver.  He is demanding and impatient and i just failed miserably. Yikes.

God becoming human in our heads causes us to instinctively put up walls in our heart.  It keeps God small. Angry and unapproachable. It prevents us from knowing in our hearts how loving, sweet, holy and just God truly is.

The Bible tells us that the truth will set us free. The Emmaus men had been freed. Jesus died and rose again to set them free— for eternity.

But they saw Jesus as a man. And dead men don’t rise from the dead.

And when they realized that Jesus isn’t human, when they saw Jesus for who He really was, they couldn’t wait to tell people.

These men who had just arrived at their destination headed back to Jerusalem (approximately eight miles in the hot sun). They couldn’t wait to tell others the news.

i feel like that’s what happened to me in 2017. All these years, so many truths about God were in my head, but not in my heart. i couldn’t recognize Him for who He truly was.

In God’s perfect way and timing (which i do not claim to understand), the blinders began to drop from my eyes.

i began to realize that God isn’t human.

The moment that happened for the men to Emmaus was when Jesus broke the bread.

i believe that is significant.

The breaking of Jesus body was the ultimate act of love.

i believe it is when we truly see God’s love for us that we begin to view everything differently.

Just a few of the lies i’ve believed that make God human:

He expects something in return.

i had a family member who was giving, but there were always strings attached. Every time i would upset or disappoint this person in some way, they reminded me of all they had done for me. That i owed them.

When God gave us the gift of His Son Jesus, that’s exactly what it was: a gift of love. What do you do with a true gift? It is simply to be received.

“… you have been saved by grace through believing. You did not save yourselves; it was a gift from God.” (Eph. 2:8-9)

We owe Him everything, but He never comes to collect the debt.

i’ve struggled with people pleasing for most of my life. More and more God is helping me to be more comfortable with being misunderstood.

Because often when we follow God, we leave people scratching their heads. God doesn’t play by the world’s rules. His ways often don’t make sense to us humans.

Jesus was fine with being misunderstood. He wasn’t even understood by His own family and disciples! His brothers thought He was uppity (We grew up with this guy! Who does He think He is?) The disciples were always misunderstanding what He said.

But Jesus focus wasn’t and isn’t to meet anyone’s expectations. God takes the long view. He sees the big picture. He knows His plan for us and for the world is eternally loving and good, even when it seems temporarily cruel and confusing.

“My intentions are not always yours, and I do not go about things as you do. My thoughts and My ways are above and beyond you …” (Is. 55:8-9 THE VOICE)

[Tweet “We owe Jesus everything, but He never comes to collect the debt.”]

He expects me to produce results.

For years, I longed for certain outcomes. i did everything i could think of to produce them. And mostly, i fell short. Or the results were short-lived. Or they didn’t look like i had hoped.

By 2017, trying to achieve results had overwhelmed me.

And i finally realized why i was so weary: Results are not my job.

A loving God only invites us to follow Him. One step at a time.

Outcomes are up to Him alone. Such freedom in that! i don’t have to produce. i just have to follow!

Circumstances and life may overwhelm us. Sometimes the steps God leads us to take will feel scary and overwhelming. But He promises to empower us every step of the way.

Don’t be afraid, for I am with you. Don’t be discouraged, for I am your God. I will strengthen you and help you. I will hold you up with my victorious right hand. (Is 41:10 NLT)

People can think the worst of us. They judge us by our mistakes and inadequacies. They define us by our failures. What they think about us or how they feel about us can change from day to day and moment to moment.

God always views us through the lens of love. And we are no more worthy of it on our best days than on our worst!

“For I am convinced that neither death nor life, neither angels nor demons, neither the present nor the future, nor any powers, neither height nor depth, nor anything else in all creation, will be able to separate us from the love of God that is in Christ Jesus our Lord.” (Rom. 8:38-39 NIV)

How many people have let you down? Said one thing and done another. You’ve probably lost count. Me, too. We’ve experienced so many disappointments, so many broken promises, that we’ve been conditioned to expect the worst. To harden our hearts so we won’t be as wounded by disappointment.

People — even those who love us dearly — will always let us down.

Here’s what i think God says to us: “But that’s not what I’m going to do.”

One day, I found myself crying for no particular reason. It wasn’t a sad cry. I actually felt really happy and at peace.

i wondered then, “Why am I crying?” And i felt God say to my heart: I’m overwhelming you with My love. That is the only time i will overwhelm you.

You can trust Someone who loves you that much.

You can rest knowing that He has your back.

You can wait on His timing because you know HIs pace and purpose for you has been lovingly and uniquely calibrated for your unique design and journey.

You can persevere because you know He keeps His promises.

How we view God doesn’t change who He truly is. He isn’t human. We just need eyes to see.

When we do, His love will always overwhelm us.